The U.S. Blockade on Cuba is a cruel and inhumane policy which has negatively affected every aspect of Cuban society for over 5 decades. For the 24th consecutive year, on October 27 the world voted overwhelmingly in favour of Cuba’s resolution demanding an end to the criminal and illegal blockade of Cuba by the United States. The results at the United Nations General Assembly were 191 in favor of Cuba. Only the U.S. and Israel voted to keep the unjust blockade on Cuba. This decision clearly showed the hypocrisy of the U.S. government talk about normalizing relations with Cuba while one of the most outrageous parts of the U.S.’s aggression towards Cuba is still in full force. 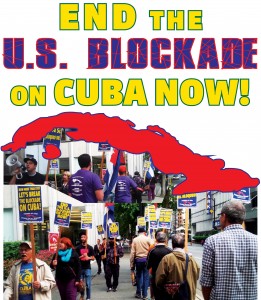 In between rounds of energetic picketing and chanting, participants heard from different local and international speakers and Cuba solidarity activists. This included Tamara Hansen, coordinator of Vancouver Communities in Solidarity with Cuba (VCSC) and Gloria La Riva from the newly formed Cuba and Venezuela Solidarity Committee in the U.S. who spoke to the rally over phone from San Francisco.

Azza Rojbi, co-coordinator of FCAB and Thomas Davies, executive member of VCSC spoke about the illegal occupation of Guantánamo by the United States and their upcoming participation at the 4th International Seminar for Peace and Abolition of Foreign Military Bases, November 22-25 in Guantánamo, Cuba. To read the report back from their trip please see page 32 in this issue of Fire This Time Newspaper.

Join Friends of Cuba Against the U.S. Blockade – Vancouver this December 17th 4pm in front of the U.S. consulate in Vancouver as we mark one year after the historic victory of the freedom of the Cuban 5 Heroes and as we continue our struggle to demand:

> END THE BLOCKADE ON CUBA NOW!
> RETURN GUANTANAMO TO CUBA NOW!
> US GOVERNMENT STOP THE CAMPAIGN OF ‘REGIME CHANGE’ IN CUBA AND IMMEDIATELY STOP INTERFERING IN CUBA’S SOVEREIGNTY AND SELF-DETERMINATION!