Before the Cuban revolution, Cuba was governed by a series of dictators imposed by the U.S. government. The Cuban people lived in poverty and famine while the resources of their country were being stolen and plundered by foreign companies. U.S. Companies owned over 50% of Cuba’s railways, over 70% of its land and 90% of Cuba’s telephone and electricity services.

On January 1, 1959, the Cuban people led by Fidel Castro succeeded in overthrowing the U.S. backed dictator Fulgencio Batista. A new Cuban government was formed to represent the interest of the Cuban people and their right to self-determination. The new revolutionary government kicked out U.S. corporations, nationalized all industries and invested in healthcare, education, development and jobs.

This triumph of the Cuban revolution was a big defeat to the domination of U.S. imperialism in Latin America. That is why ever since then the U.S. government have carried policies of sabotage and aggression against Cuba and imposed a full economic blockade against the island. This cruel blockade has so far cost the Cuban economy $1.2 trillion and continue to cause shortages of medicine, food and other necessary supplies to the Cuban people.

A new era of Cuba-U.S. relation?

On the morning of December 17, 2014 the governments of Cuba and the United States announced the re-establishing of diplomatic relations between the two countries. Around the world people woke up to the historic news of the return of the Cuban 5 Heroes to Cuba, after over 16 years of unjust imprisonment in the United States.

From that time, a number of steps have been taken towards “normalizing” relations. The U.S. was forced to take Cuba off its “State sponsor of terror” list, the Cuban flag flies proudly at the newly re-opened Cuban embassy in Washington DC and we witnessed the loosening of some trade and travel restrictions. While those are positive steps, the U.S. government still maintains in full force the most outrageous aspects of U.S. aggression towards Cuba, the almost 6 decades Blockade on the island and the U.S. occupation of Guantánamo Bay, Cuba.

This hypocrisy of the U.S. foreign policy toward Cuba was demonstrated again this year. On October 27, 2015, at the United Nations General Assembly, the world voted overwhelmingly, 191 countries to 2, in favor of Cuba’s resolution demanding an end to the criminal and illegal blockade of Cuba by the United States. Only the U.S. and Israel voted against the resolution.

Cuba stands firm in the principles it’s been defending since the triumph of the revolution and strongly assert that a true normalization between the countries has to be based on the respect of Cuba’s sovereignty and self determination.

As the Cuban President Raúl Castro explained in his speech at United Nations General Assembly on September 28, 2015 “After 56 years in which the Cuban people put up a heroic and selfless resistance, diplomatic relations have been re-established between Cuba and the United States of America. Now, a long and complex process begins toward the normalization that will only be achieved with the end of the economic, commercial and financial blockade; the return to our country of the territory illegally occupied by Guantanamo Naval Base; the cessation of radio and TV broadcasts, and of subversion and destabilization programs against the Island; and, when our people are compensated for the human and economic damages they still endure.” 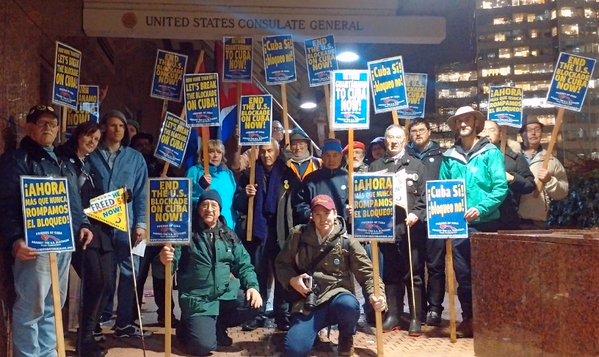 Vancouver steps up the fight against the U.S. blockade on Cuba

Friends of Cuba Against the U.S. Blockade- Vancouver, formerly known as the Free the Cuban 5 Committee-Vancouver (FCAB-Vancouver), upon celebrating the historic victory of the freedom of all 5 Cuban Heroes began to reorganize themselves in a new organization to respond to new challenges in defense of Cuba’s sovereignty and against the U.S. blockade. With 10 years of experience through protests and actions in defense of the 5 Cuban Heroes, the group decided to join many people and groups around the world in focusing their work on ending the cruel U.S. blockade and demanding the return of Guantánamo Bay to Cuba.

On December 17, 2015, the world marked one year after the establishment of the new Cuba-U.S. diplomatic relations and the historic victory of the freedom of the Cuban 5 Heroes. On the streets of downtown Vancouver chants of “Cuba Si! Bloqueo No!” were heard as FCAB-Vancouver held its 4th monthly picket action in front of the U.S. consulate.

Participants braved the rainy Vancouver weather with their picket signs demanding “End the U.S. blockade on Cuba NOW!” “Return Guantánamo to Cuba NOW!”. Local and national Cuba solidarity activist were invited to share some words with participants in between rounds of energetic picketing. This included Sam Heaton from the group Ottawa-Cuba Connections, who shared greetings from Cuba solidarity activists in Ottawa, who also were out in the streets protesting the U.S. blockade on Cuba in front of the U.S. embassy in Ottawa. On that same day, activist with the Table de concertation de solidarité Québec-Cuba took to the streets of Montreal to join their voices to Vancouver and Ottawa in demanding an end to the inhuman blockade on Cuba by the United States.

Indeed 2015 was a year full of exciting advancements and positive changes but our work is far from over. As we welcome the New Year, we need to continue building the campaign against the U.S. blockade on Cuba locally, nationally and internationally. If you are in Vancouver, Canada please join us for the next monthly picket action of the Friends of Cuba Against the U.S. Blockade (FCAB-Vancouver) on Sunday January 17, 2016 at 4pm in front of the United States Consulate (1075 W. Pender St. in Downtown Vancouver).