Tomorrow I will turn 90 years old. I was born in a territory called Birán, in the eastern region of Cuba. It’s known by that name, although it has never appeared on a map. Given its good conduct it was known for close friends and, of course, a stronghold of political representatives and inspectors involved in any commercial or productive activity typical of the neocolonized countries of the world.

On one occasion I accompanied my father to Pinares de Mayarí. I was eight or nine years old. How he enjoyed talking when he left the house in Birán! There he was the proprietor of the land where sugar cane, pasture and other agricultural crops were planted. But in Pinares de Mayarí he was not a proprietor, but a leaseholder, like many Spaniards, who were the owners of a continent under the rights granted by a papal bull, of whose existence none of the peoples and human beings of this continent were aware. Already, the knowledge transmitted then was largely treasures of humanity.

The altitude rises to approximately 500 meters, with inclined, rocky slopes, where the vegetation is scarce and at times hostile. Trees and rocks obstruct transit; suddenly, at a certain height, a vast plateau begins which I estimate extends over approximately 200 square kilometers, with rich deposits of nickel, chromium, manganese and other minerals of great economic value. From that plateau dozens of trucks of pines of great size and quality were extracted daily.

Note that I have not mentioned the gold, platinum, palladium, diamonds, copper, tin, and others that at the same time have become symbols of the economic values that human society, in its present stage of development, requires.

A few years before the triumph of the Revolution my father died. Beforehand, he suffered a lot.

Of his three sons, the second and third were absent and distant. In revolutionary activities both fulfilled their duty. I had said that I knew who could replace me if the adversary was successful in its elimination plans. I almost laughed about the Machiavellian plans of the presidents of the United States.

On January 27, 1953, after the treacherous coup by Batista in 1952, a page of the history of our Revolution was written: university students and youth organizations, alongside the people, carried out the first March of the Torches to commemorate the centenary of the birth of José Martí.

I had already reached the conviction that no organization was prepared for the struggle we were organizing. There was complete disorientation from the political parties that mobilized the masses of citizens, from the left to the right and the center, sickened by the politicking that reigned in the country.

At the age of 6 a teacher full of ambitions, who taught in the small public school of Birán, convinced my family that I should travel to Santiago de Cuba to accompany my older sister who would enter a highly prestigious convent school. Including me was a skill of that very teacher from the little school in Birán. She, splendidly treated in the house in Birán, where she ate at the same table with the family, was convinced of the necessity of my presence. Certainly, I was in better health than my brother Ramón – who passed away in recent months – and for a long time was a classmate. I do not want to be extensive, only that the years of that period of hunger were very tough for the majority of the population.

I was sent, after three years, to the Colegio La Salle in Santiago de Cuba, where I was enrolled in the first grade. Almost three years past without them ever taking me to the cinema.

Thus began my life. Maybe I will write, if I have time, about this. Excuse me for not having done so before now, it’s just I have ideas of what a child can and should be taught. I believe that a lack of education is the greatest harm that can be done.

Humankind today faces the greatest risk of its history. Specialists in these areas can do the most for the inhabitants of this planet, whose number rose, from one billion at the end of 1800, to seven billion at the beginning of 2016. How many will our planet have within a few years?

The brightest scientists, who now number several thousand, are those who can answer this question and many others of great consequence.

I wish to express my most profound gratitude for the shows of respect, the greetings and the gifts that I have received in recent days, which give me the strength to reciprocate through ideas that I will transmit to the members of our Party and relevant organizations.

Modern technical means have allowed for scrutiny of the universe. Great powers such as China and Russia can not be subject to threats to impose the use of nuclear weapons. They are peoples of great courage and intelligence. I believe that the speech by the President of the United States when he visited Japan lacked stature, and it lacked an apology for the killing of hundreds of thousands of people in Hiroshima, in spite of the fact that they knew the effects of the bomb. The attack on Nagasaki was equally criminal, a city that the masters of life and death chose at random. It is for that reason that we must hammer on about the necessity of preserving peace, and that no power has the right to kill millions of human beings. 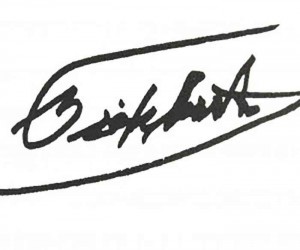