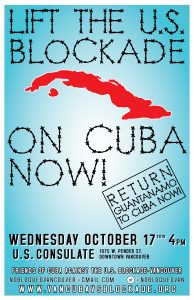 On August 24, Cuba released its yearly report to the United Nations General Assembly on the impacts of the U.S. blockade against Cuba. The report detailed the effects on Cuba’s economy of the cruel U.S. blockade: “The economic, commercial and financial blockade imposed by the United States against Cuba constitutes the principal obstacle for the development of all the potentials for the Cuban economy…In the period considered by this report [April 2017-March 2018], the blockade has caused losses to Cuba for around $ 4,321,200,000.”

In addition to the unjust blockade, the United States government continues its illegal occupation of the territory of Guantánamo Bay, Cuba as well as further hostile and aggressive policies against Cuba. As friends of Cuba around the world, we stand along with the Cuban people to demand an end to U.S. aggression and attacks on Cuba. From Vancouver, Ottawa and Montreal, Canada and Kiev, Ukraine we will unite our voices demanding an end to the U.S. blockade on Cuba and the full normalization of U.S. – Cuba relations!