Part of Coast-to-Coast Day of Action organized by the Canadian Network on Cuba to demand that the government of Canada fully reopen the IRCC Office and all visa services offered to Cubans in Havana, Cuba! Sign the petition: https://www.change.org/p/justin-trudeau-canada-must-reopen-ircc-office-all-visa-services-to-cubans

Since 1961, the United States economic blockade on Cuba has caused damages calculated at over 134 billion dollars by 2018 – almost 2.5 billion a year for a small island nation of less than 12 million people!

Under President Trump, the US has also newly sanctioned more than 100 Cuban companies and imposed stricter travel restrictions on its citizens which will cut the number of who visit Cuba in half. A June 23 Washington Post article quoted a Trump administration official, who spoke on the condition of anonymity, “We are serious. These are times for maximum pressure, and that is what has informed our thinking.”

Unfortunately, the Canadian government has recently taken its own hostile and unnecessary actions against Cuba. On May 8 they made the abrupt decision to shut down the section of its Immigration, Refugees and Citizenship (IRCC) Office in Havana, through which visas were processed for Cuban citizens wishing to visit Canada. This has divided families, and caused massive delays, uncertainty, and significant financial obstacles for Cubans trying to visit Canada for completely legal business, cultural, scientific and sporting relations. 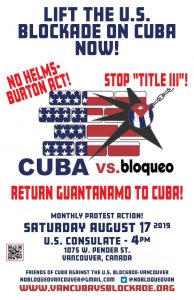 Join Friends of Cuba Against the US Blockade for our monthly picket action as we continue to stand up against U.S aggression and in defense of Cuba’s sovereignty and self-determination. We will also be participating in the important Coast-to-Coast Day of Action organized by the Canadian Network on Cuba to demand that the government of Canada fully reopen the IRCC Office and all visa services offered to Cubans in Havana, Cuba.