On May 2, 2016 the daily news in Canada was filled with images of a cruise ship docking in the Havana Harbour. Lines of passengers crowded on the ship decks to catch a glimpse of Cuba, a country they had never seen before, although it is only 90 miles from the United States. Due to the cruel and illegal U.S. blockade on Cuba, and the U.S. travel ban that prevents its citizens from travelling to Cuba as tourists, this cruise ship is the first from the United States to dock in Cuba in over five decades.

Despite the step forward in U.S./Cuba relations that this cruise ship represents, the U.S. travel ban on Cuba, as well as the most damaging aspects of the blockade on Cuba, both remain fully in place. For example, not a single one the nearly 700 passengers on the cruise ship travelled to Cuba as a tourist, an act which remains illegal under U.S. law. There is also the fact that most of the inhuman economic, commercial and financial blockade on Cuba is still in place, including the ability of the U.S. government to impose severe fines on U.S. and foreign companies for trading with Cuba. Relations between the U.S. and Cuba are still anything but “normal.” 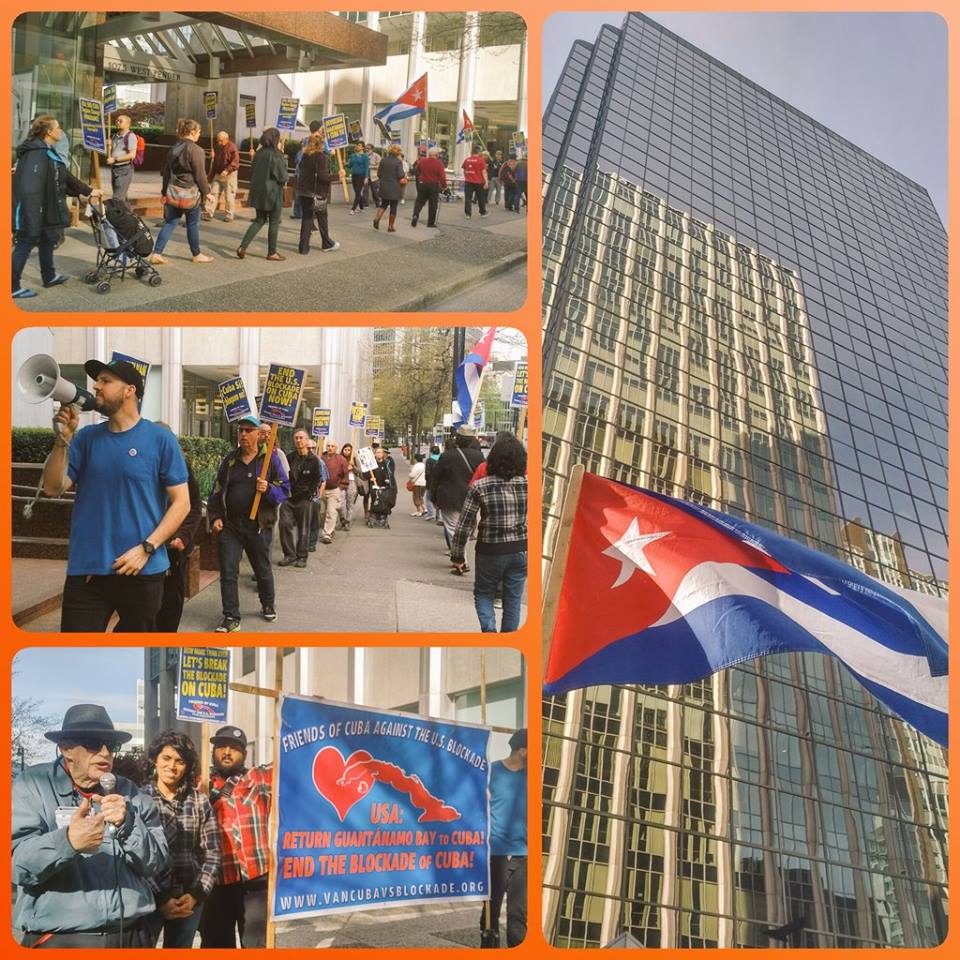 In order to protest against this continued injustice, on April 17, 2016 Friends of Cuba Against the Blockade – Vancouver (FCABVancouver) held their 8th consecutive picket action to demand that the United States lift the blockade on Cuba and return the territory occupied by U.S. Naval Base in Guantanamo. With Cuban flags and picket signs held high, activists and supporters protested and marched in front of the U.S. Consulate in downtown Vancouver.

Following the first chants of “Hey Obama, Lift the Blockade!” led by the co-coordinator of FCAB-Vancouver, a diverse program of speakers brought to light the current state of U.S./Cuba relations. Speakers included Tamara Hansen, the Coordinator of Vancouver Communities in Solidarity with Cuba (VCSC) and author of the book “5 Decades of the Cuban Revolution: The Challenges of an Unwavering Leadership,” David Whittlesey, a long time civil-rights and social justice activists as well as Nino Pagliccia, the editor of “Cuba Solidarity in Canada: Five Decades of People to People Foreign Relations.”

Each month the Friends of Cuba Against the U.S. Blockade – Vancouver protest is organized in coordination with a protest organized by Ottawa Cuba Connections at the U.S. Embassy.

Each day that the U.S. blockade against Cuba persists and Guantanamo remains in the hands of the U.S. government is a rallying cry to supporters Cuba’s right to sovereignty and self-determination to re-double our united efforts! 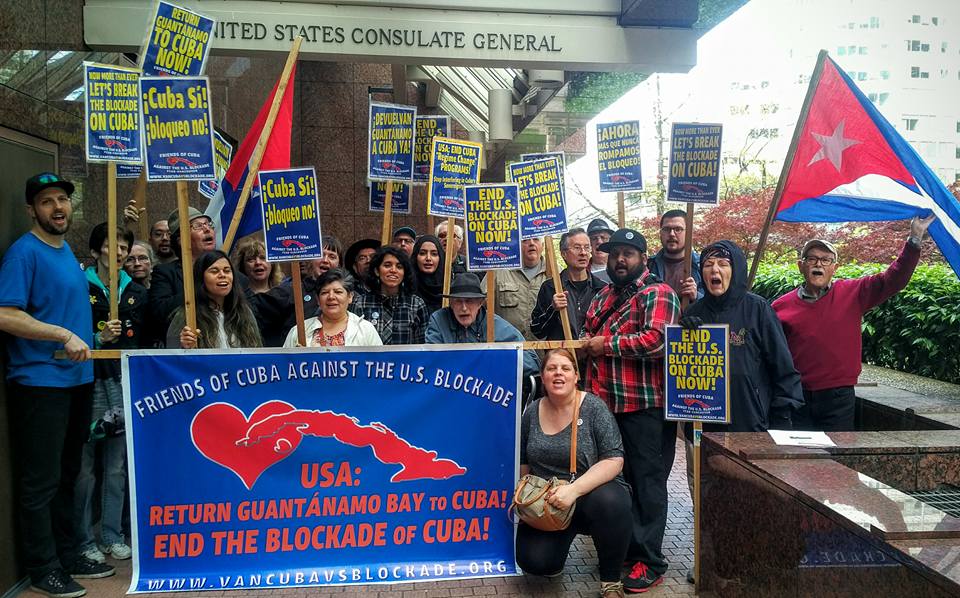 Join FCAB-Vancouver at the next picket action, Tuesday, May 17th, 4-5pm at the U.S. Consulate in downtown Vancouver, 1075 W. Pender Street.

To get involved visit: http://www.vancubaVSblockade.org

> END THE BLOCKADE ON CUBA NOW!
> RETURN GUANTANAMO TO CUBA NOW!
> US GOVERNMENT STOP THE CAMPAIGN OF ‘REGIME CHANGE’ IN CUBA!
> STOP INTERFERING IN CUBA’S SOVEREIGNITY AND SELF-DETERMINATION!