“The U.S. has no moral authority to talk about human rights. Its position is hypocritical, dishonest and with a double standard. Does anyone know of a longer, crueler and bigger violation of human rights than the U.S. economic, commercial and financial blockade against Cuba?”

Those were the words of the Cuban President Miguel Díaz-Canel Bermúdez in response to the latest attack on Cuba where U.S. Secretary of State Pompeo issued a public letter to Cuban Foreign Minister Bruno Rodriguez criticizing Cuba on human rights. That same week, on December 10, the Trump administration announced another hostile move against Cuba, the permanent closing of its Citizenship and Immigration Service office in Havana.

As the United States government continues its unjust blockade and aggression against Cuba, people around the world will continue standing with the people of Cuba in defending their sovereignty and demanding the end of the criminal U.S. blockade. Vancouver activists together with friends of Cuba in Ottawa and Montreal, Canada, and Kiev, Ukraine will unite our voices to demand an end to all U.S. hostilities and aggressive policies against Cuba. 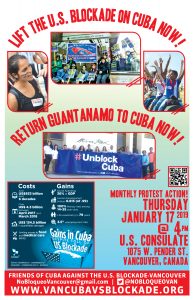