On January 17, 2016, the 5th monthly protest demanding the U.S. Government immediately end its cruel and inhuman blockade against Cuba took place in front of the U.S. Consulate in Vancouver. More than 30 people participated in the action organized by the Friends of Cuba Against the U.S. Blockade-Vancouver (FCAB-Vancouver). The group is responding to the urgent need of Cuba to see the U.S. blockade lifted. However they are not alone. Voices from around the world have made their demand clear: The time is now! Lift the Blockade!

Since 1962, the U.S. blockade has caused Cuba damages totaling over 1.2 trillion dollars and counting. 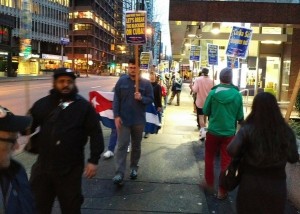 For these reasons, more and more people have become vocal in their opposition to the U.S. blockade. In fact, the United Nations (UN) in October of 2015, voted 191 in favor with only 2 opposed to Cuba’s resolution demanding and end to the Blockade. The 2 opposing votes came from the usual suspects, Israel and the U.S. itself.

However, it seems almost the entire worlds opinion has not been enough to end the U.S. blockade. With this in mind, the organizers and participants of the FCAB-Vancouver protest gathered once again chanting, “Lift! Lift! Lift the Blockade!” in front of the U.S. Consulate.

Included in the program of speakers at the monthly action were activists from Ottawa-Cuba Connections, a group that alongside Vancouver organize monthly protests in front of the U.S. Embassy in Ottawa. Members of the group spoke live over the phone from their action. Concluding the protest was Tamara Hansen, coordinator of Vancouver Communities in Solidarity with Cuba (VCSC). 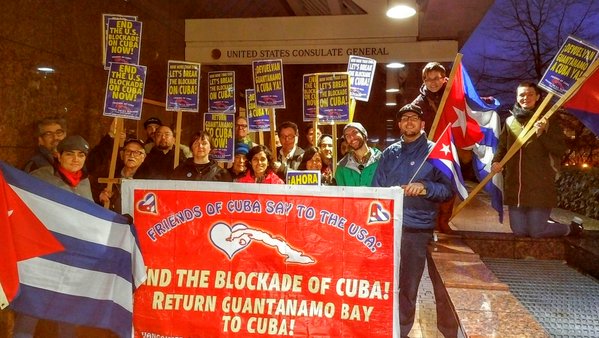 The Friends of Cuba Against the U.S. Blockade-Vancouver (FCAB) encourages all people who support Cuba’s right to self-determination to join them in their monthly campaign in front of the U.S. Consulate in Vancouver to demand:
END THE U.S. BLOCKADE ON CUBA!
RETURN GUANTÁNAMO TO CUBA NOW!