This November, the United Nations General Assembly (UNGA) once against held its annual vote against the unjust U.S. blockade on Cuba. For the 28th consecutive year, the vast majority of the world stood with Cuba condemning the cruel and harmful blockade.
Prior to the vote, it was anticipated that the U.S. would gain votes from previous years. In the past 6 months Washington has been tightening the screws of the blockade, attempting to pressure the people of Cuba – through hardship and economic shortages – to abandon the gains of the Cuban revolution and submit to the domination of the United States’ hegemonic agenda. Many Cuban officials tweeted that their colleagues around the world informed them that the Trump administration had been contacting governments and diplomats around the world to pressure them to side with the U.S. against Cuba in this, annual international vote.

Despite the Trump administration’s best and concerted efforts, the world stood firm against the blockade and in, of the Cuban people and government. The final tally was 187 countries in favour of Cuba’s resolution condemning the blockade. Only 3 isolated countries stood against Cuba, the U.S., Israel, and Brazil. Two other countries cowered to Washington and abstained from the vote, Columbia and Ukraine. 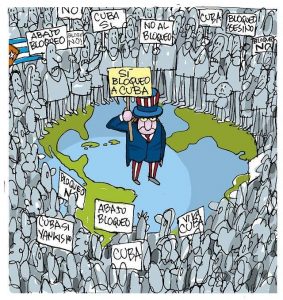 The U.S. blockade on Cuba has put enormous strain on Cuba’s economy causing Cuba to lose approximately $4.5 billion this year alone, and nearly $1 trillion dollars ($922.6 billion – adjusted for inflation) during nearly 60 years of blockade. This cruel U.S. policy – which Cuba refers to as genocidal – prevents the island from accessing vital medicines; industrial machinery; school supplies; construction supplies; medical equipment; computer technology; and financial transactions with many international institutions.
While previous U.S. President Obama made some positive first steps towards normalizing U.S.-Cuba relations, the blockade has remained in place. Throughout 2019, President Trump has worked hard to roll back many small gains made under Obama, including several new restrictions on U.S. citizens who want to travel to Cuba.

Despite the Trump administration and previous U.S. administration’s best efforts, each consecutive government has failed to turn the tide at the United Nations General Assembly against the Cuban government and Cuban people. For the 28th year in a row, the world community stood together to condemn the United States’ unjust and cruel blockade on the people of Cuba.

However, the world’s repudiation of the blockade is not only seen at the UN. Every year around the world groups and individuals continue to mobilize with petitioning, posting on social media, chanting & singing, rallying, and protesting around the united demand, “End the Blockade on Cuba NOW!”