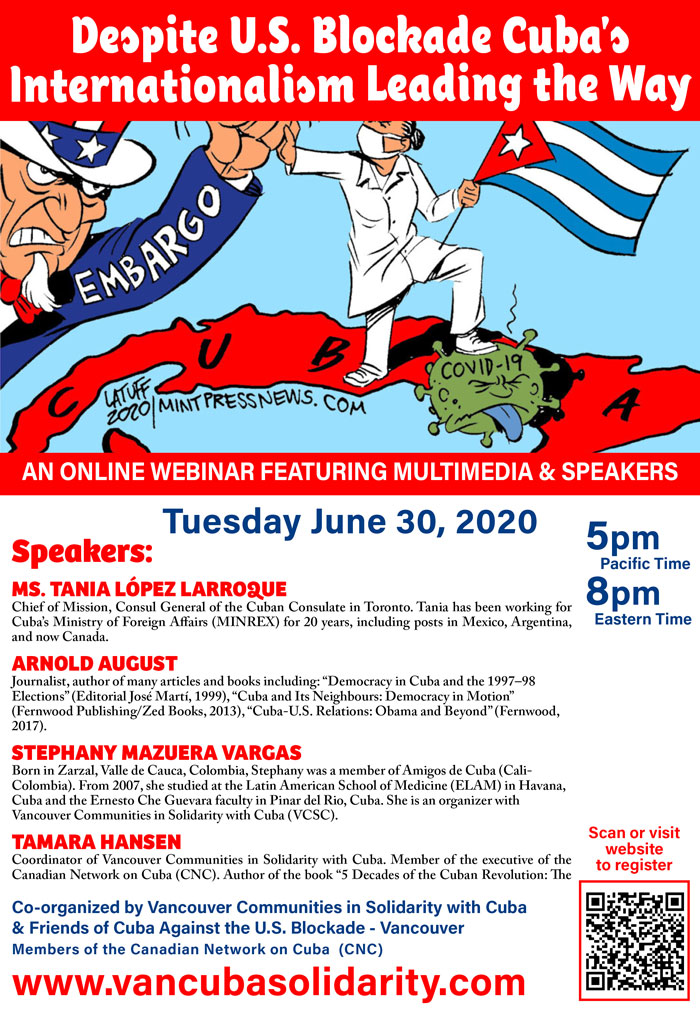 FEATURING:
>> TANIA LÓPEZ LARROQUE – Consul General of the Cuban Consulate in Toronto. She graduated from the University of Havana’s School of Foreign Languages and completed her post-graduate studies at the Institute of Foreign Affairs in Havana. She has been working for Cuba’s Ministry of Foreign Affairs (MINREX) for 20 years, including posts in Mexico, Argentina, and now Canada.

>> ARNOLD AUGUST – Author of many articles and books including: “Democracy in Cuba and the 1997–98 Elections” (Editorial José Martí, 1999), “Cuba and Its Neighbours: Democracy in Motion” (Fernwood Publishing/Zed Books, 2013), “Cuba-U.S. Relations: Obama and Beyond” (Fernwood, 2017). An accomplished journalist, he contributes articles in English, Spanish and French to news and research sites in the United States, Canada, Cuba, Latin America and Europe.

>> STEPHANY MAZUERA VARGAS – Born in Zarzal, Valle de Cauca, Colombia, Stephany was a member of Amigos de Cuba (Cali-Colombia). From 2007, she studied at the Latin American School of Medicine (ELAM) in Havana, Cuba and the Ernesto Che Guevara faculty in Pinar del Rio, Cuba. She is an organizer with Vancouver Communities in Solidarity with Cuba (VCSC).

>> TAMARA HANSEN – Coordinator of Vancouver Communities in Solidarity with Cuba. Member of the executive of the Canadian Network on Cuba (CNC). Author of the book “5 Decades of the Cuban Revolution: The Challenges of an Unwavering Leadership” (Battle of Ideas Press, 2010).

In May 1963, the first Cuban medical international brigade left Cuba for Algeria. Since then, tens of thousands of Cuban doctors and medical professionals have served in countries around the world, delivering free world-class medical care to those in need. Today, there are over 3,000 Cubans fighting Covid-19 in 29 countries as members of the specialized Henry Reeve International Medical Brigades.

In the face of the coronavirus pandemic, Cuba’s internationalism is leading the way, despite the continued suffering imposed upon Cuba by nearly 6 decades of a cruel U.S.-blockade.

Join this webinar to hear speakers from Canada, Cuba and around the world discuss all that Cuba’s internationalism has to offer to humanity – from its focus on preventative medicine, to its biotech and new medicines, to its other forms of internationalist solidarity, to other lessons and gains of the Cuban revolution.

This event will be broadcast from the traditional and unceded territories of the Tsleil-Waututh (səl̓ilwətaɁɬ), the Musqueam (xʷməθkʷəy̓əm), and the Squamish (Skwxwú7mesh) Coast Salish Nations.

Co-organized by: VANCOUVER COMMUNITIES IN SOLIDARITY WITH CUBA (VCSC) & FRIENDS OF CUBA AGAINST THE U.S. BLOCKADE – VANCOUVER (FCAB-Vancouver)
(Members of the Canadian Network on Cuba-CNC)