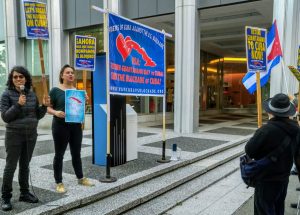 On August 24, 2018, Cuba released its yearly report to the United Nations General Assembly on the impacts of the cruel U.S. blockade against Cuba. The report detailed: “The economic, commercial and financial blockade imposed by the United States against Cuba constitutes the principal obstacle for the development of all the potentials for the Cuban economy…In the period considered by this report [April 2017-March 2018], the blockade has caused losses to Cuba for around $ 4,321,200,000.”

Just imagine what the government of Cuba would be capable of achieving with $4.3 billion more to spend on housing, education and healthcare each year. This thought fueled the energetic chants of September 17, 2018, monthly picket action organized by Friends of Cuba Against the U.S. Blockade – Vancouver. Together with friends of Cuba in Ottawa and Montreal, Canada and Kiev, Ukraine, who organize a monthly picket action on the 17th of each month, participants also protested the illegal U.S. occupation of the territory of Guantánamo Bay, Cuba as well as further hostile and aggressive policies against Cuba.

Colourful and dynamic photos from the picket actions were shared far and wide, as part of the September 17 Twitter Storm for Cuba organized by the Cuban Institute of Friendship with the Peoples (ICAP), alongside the hashtags #Cuba, #NoMasBloqueo and #UnblockCuba. 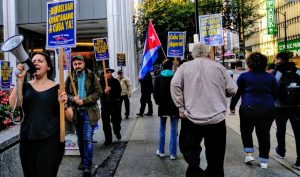 On October 31, 2018, the United Nations will vote on a resolution against the U.S. blockade on Cuba for the 25th consecutive year. Each year, the UN overwhelmingly condemns this criminal policy (last years vote was 191 countries against the blockade, and only two – the United States and Israel, in favour). From Vancouver, Canada we will continue uniting our voices demanding an end to the U.S. blockade on Cuba and the full normalization of U.S. – Cuba relations! 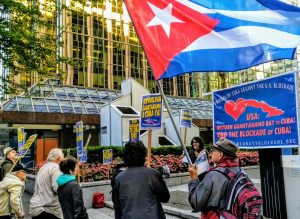